The transformation of normal cells into cancer cells. Also referred to as carcinogenesis (although some authors make a distinction). This multi-stepped process is characterized by changes at the cellular, genetic, and epigenetic levels and abnormal cell division. Tumours enlarge because cancer cells lack the ability to balance cell division by cell death (apoptosis) and by forming their own vascular system (angiogenesis). The transformed cells lose their ability to interact with each other and exhibit uncontrolled growth, invade neighbouring tissues and eventually spread through the blood stream or the lymphatic system to distant organs. (From Mechanisms of Carcinogenesis: Contributions of Molecular Epidemiology, IARC Scientific Publication No. 157).

CCRC 2021 Pre-Conference Survey April 9, 2021
We want to hear from you on how to make this year’s Canadian Cancer Research Conference (CCRC) a meaningful and unique experience! To ensure the success of our first-ever virtual conference this November, we are asking all those who are interested in attending to take 3-5 minutes to complete a short survey sharing your interests and feedback. The results of this survey will be used to inform the format, delivery, and scientific content of the conference to make the event as valuable, engag... Read More » 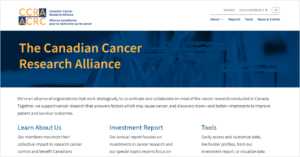 We've refreshed this website with a new look and feel, improved navigation, and a dynamic timeline of our history. This site also better highlights our resources. Work will continue on the functionality and content over the coming year. In the interim, we welcome your feedback! Read More »